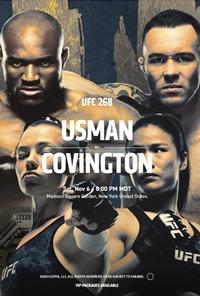 The UFC returns to the World's Most Famous Arena on Saturday, November 6, as Madison Square Garden in New York City hosts UFC 268, featuring a championship doubleheader of epic proportions. In the main event, UFC welterweight champion Kamaru Usman meets the man who gave him the toughest fight of his career, Colby Covington, in a highly anticipated rematch that will settle the score between these two rivals once and for all. Plus, Rose Namajunas and Zhang Weili meet once again for the strawweight title Namajunas took from the Chinese star in April, and that she is determined to keep in her possession while Zhang seeks redemption in the Big Apple. But before the titles are on the line, the Fight of the Year race heats up when lightweight action heroes Justin Gaethje and Michael Chandler collide. UFC 268: Usman vs Covington 2 - Saturday, November 6 live from Madison Square Garden in New York, NY