Scrotum: The Second One 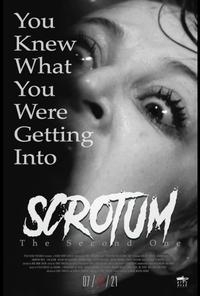 Military deployments from Alpha Dynamics, a global conglomerate warfare manufacturer, are set out to clean up and erase all loose ends created by the potent toxin known as NOXIOUS-8. After learning of Lindsay Carmichael's presence and involvement in the previous incident, hitmen Casper Furtelli and Logan Rodriguez are sent out to abduct and silence her.

Lindsay wakes up in a hospital room, where just a few floors below the bodies from the restaurant are being delivered. The monster, now needing to harvest itself within a host, wakes up and is set out to once again feed. Lindsay is attacked, but saved as the hitmen open fire, wounding the human vessel the monster has inhabited. Lindsay is abducted and taken out to a clearing in the woods to be executed. After another attack, Lindsay and Logan set out to find their way out of the woods and fight through another day of the strange. Another day of the Scrotum.